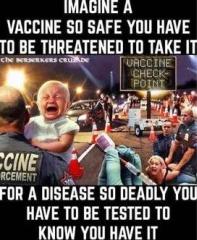 "It has been called 'Nuremberg 2.0' by many, as expectations have been that there would be some kind of trial in an international court of law where these criminals would be prosecuted"

" ... he made clear ... that the judicial system is owned and controlled by the Globalists, and justice will not be found in today’s courts, whether it is Germany or the U.S., or any other country"

"That doesn’t mean that they are not going to proceed with a trial that will be similar to the original Nuremberg trials. He states that there will be a real judge, real lawyers, and real witnesses, but the jury will be 'the people' who will watch it via live stream"

"... this is very important work that Dr. Fuellmich and his team have been doing, nevertheless, because they are exposing the entire COVID conspiracy, and as he stated, 'There are no more conspiracy theories left. They have all become true and are no longer theories' ”

Read the full article where he discusses the nature of the fraud, the identities of the fraudsters, and the trail of evidence, how "Nuremberg 2" may/will be played out, and what processes that trial will lead into.

This will be the firing gun that starts the process of renewal, whereby all our failed institutions will be reimagined and reconstituted. The precise pathway will no doubt have to be worked out and it sounds as though this may lead to the greatest re-engineering of our global society of all time ...

This is the first time that I have seen all this spelled out so clearly.

It's just his view of course, but I suspect that it's a view that will be shared by many and ultimately supported by many more once the truth is out.

Let's get on with it!