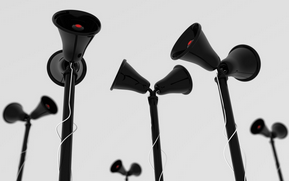 This topic is perhaps little mentioned - it is taken for granted by proponents of the status quo and is an assumed article of faith by the deniers of the status quo. So the two sides do little other than assert the correctness of their proposition.

However, whilst the faithful have historically outnumbered the disillusioned manifold, the numbers marching across the bows of the BBC last Saturday 15th May bear witness to the idea that this is changing. People are crossing over to the disillusioned in significant numbers.

The Government's handling of the Covid phenomenon has certainly contributed to a loss of faith in the impartiality of our media, and the fact that they have been almost religiously on-message over the past year illustrates very well that for whatever reason (and we can't discount the idea that daily full-page Covid advertisements may have been influential) the mainstream media is no longer publishing anything that seriously conflicts with government policy. So much for fearless reporting - there has been no shortage of well-qualified medical opinion to take note of should they have had the inclination to challenge the government spokespersons at any of the very many Coronavirus briefings that have been held in Downing Street.

Well, you may say that in the pandemic situation only disciplined collective action led by the government can save us from a great many deaths, so we should obey their diktats whatever we think of them, and therefore any opposing views must be censored. This is war, a war against a deadly disease. All necessary measures must be taken.

In the wars against Germany, the dangers were all too real. Hardly a family in the kingdom was unaffected by loss of loved ones. The enemy's aircraft flew daily over our islands for all to hear and see. People dug air-raid shelters in their gardens.

In the war against Covid, the government's own statistics show that deaths were at best arbitrarily counted and at worst deceitfully counted, and that overall excess deaths never approached the numbers officially attributed to Covid.

And in January 2021 the WHO belatedly admitted that the PCR test, unless rigorously used in a clinical situation (ie: not in isolation in the general asymptomatic public setting) can create too many false positives to be useful.

The consequences of this single fact are enough to collapse the pandemic narrative totally - yet the media have "not noticed".

We can draw only one conclusion - they are not fit for purpose.

And finally, if the media really are now mostly the propaganda arm of the UK / World government, to what purposes are they being used?