So What Happened on Jan 6th? 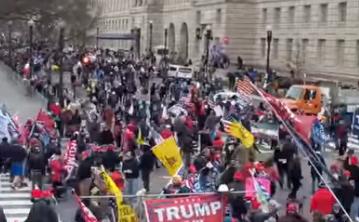 Since the events of 6 Jan we have been treated by our MSM to daily double-page spreads condemning Trump and excoriating "the mob" which "attacked" the Capitol in Washington DC.

So the MSM evidently now hold in contempt at least 50% of the voters or perhaps nearer 75%.

So where is the evidence that this "mob" "stormed" the Capitol? Did defenders die heroically? No, one "air force veteran" (from the "mob") was reportedly shot and died, but i have not seen reports of defenders being injured (11 Jan - correction - one police officer also died, reportedly injured “while physically engaging with protesters”). So it appears to me as if they may have managed to let them in without offering too much resistance.

What I did see on the live-stream was a few trouble-makers throwing impromptu missiles through a doorway and breaking adjacent windows. Stupid, illegal, and dangerous certainly, but it hardly amounted to a full-scale assault and seemed to involve almost nobody in the main crowd. In fact it struck me at the time as being all rather desultory.

No matter, the Bastille has been stormed and the mobster in chief must now be excommunicated, excoriated, driven from office immediately (albeit he has only a few days of office left) and probably put on trial for high crimes and misdemeanours.

But hold on - would that not mean that they would have to prove that Trump instigated the break-in? Where is the evidence to support that? All he did was lead a march along Pennsylvania Avenue to the Capitol building. Foolish maybe, but not criminal.

Why not just let the status quo play out for the few remaining days? Plenty of time then to assess evidence and decide what to do.

What we can say is that in all truth, the fact that the Capitol had been "attacked by a mob" would hardly be cause for Senators to change their minds about objecting to an election being stolen. To withdraw their objections to the designated electors should have been nothing to do with this later event - two wrongs do not make a right.

I conclude that these objections and withdrawals were entirely based on political calculation, at the possible expense of the future of democracy in the USA. It speaks volumes about their motivation.

For a native perspective on these events, LarouchePAC offer this article.

As always, it's your task to assess where the truth lies.